20 Sunday Food for the Soul: Classic Southern Recipes That We Love

No matter where you go in the South, you can find people in every village, town and city who know where to pick up a church cookbook filled with classic Sunday meal recipes passed down from generation-to-generation. These cookbooks often feature a metal or plastic ring binding so that you can open to a page and leave the book flat on a counter while you cook. The recipes aren’t merely used for after-service luncheons or evening dinners and potlucks in fellowship halls, church basements, community centers and pavilions or regional parks. Many Southerners haul out these recipes for day-to-day use, including for special meals during major life events like birthdays, graduations, weddings and funerals.

Southern luncheons often include Pulled Pork that seems to almost melt in the mouth. It’s savory and has a bit of bite from a combination of molasses, mustard and hot or barbeque sauce. Some people eat it mixed with potato or macaroni salad. One of the most popular ways of eating pulled pork is on a hamburger bun.

You’re not experiencing the true South on Sunday unless you have a heaping spoonful of Southern-style Potato Salad on your plate. A variety of ingredients give a sharp and creamy flavor to firm chunky potatoes, including chicken broth, eggs, mayonnaise, yellow mustard, basil, onions, celery, sweet relish, garlic, paprika and sugar.

For Southerners who want cheesy potatoes, Sunday meals usually include old-fashioned Funeral Potatoes, which received their name from their popularity at funeral dinners. These cheesy au gratin potatoes, unlike traditional scalloped potatoes, have hash browns as their potato base. They’re usually made as a casserole with mushroom soup and a topping of cornflakes. No matter their ingredients, they’re a hit.

It’s nearly impossible to find a Sunday church meal in the South that doesn’t include some form of Deviled Eggs. It might seem sacrilegious to serve them on Sunday, but every Southerner knows that the real sin is to exclude the from the meal. Some Southerners enjoy eating these rich, creamy treats in a single bite. Others try to savor the flavors from hardboiled yolks, egg whites, mayonnaise, yellow mustard and paprika.

Most Southern Sunday meals have a lot of side dishes. Baked Macaroni and Cheese is a classic favorite that combines cream milk, sour cream and various kinds of cheeses with elbow macaroni, eggs and pepper in a casserole dish. The result? Mouthwatering mac and cheese casserole that has a toasted baked film on the top and thick, creamy, gooey cheese throughout.

At the top of the list of Southern sandwich filling options is Ham Salad. It’s a creamy and crunchy taste sensation that combines finely chopped, fully cooked ham and hardboiled eggs with mayonnaise, mustard, sweet pickle relish, onion, celery and black pepper. Some Southern cooks also like to add small pieces of cheese to it for a bit richer flavor.

Southern side dish classics are seemingly endless. On Sundays, especially during potlucks, you might find a dozen or more different types of side dish salads. One of the most popular is Pasta Salad made with large bow-tie pasta, broccoli, grapes, red onion, mayonnaise, sugar, crumbled bacon, chopped pecans and red wine. The contrasting creamy and crunchy texture is another sign that you’re eating a Southern classic.

On a hot summer Sunday, many Southern cooks try to balance out hot dishes with cool side treats like chilled, creamy Fruit Salad. Southern cooks know how to keep mouths happy with a careful blend of sweet and tangy canned and sliced fruit, including bananas, cherries, green grapes and mandarin slices, and whipping cream, butter, sugar, lemon and eggs. The whipped creamy texture combined with fruit allows flavors to burst in your mouth with every bite.

Southern cooks aren’t known for offering only one dessert during a Sunday meal. The dessert table often has a wide selection, including several types of stone fruit cobblers and pies. Southern Peach Cobbler features thick slices of juicy fresh peaches baked into buttery, sweet dough typically enhanced with a sprinkling of cinnamon. If it’s warm enough, some people place a scoop of vanilla ice cream on top so that the sweet, vanilla syrup melts down through it.

Of course, a Sunday Southern potluck is incomplete if the dessert area fails to have no-bake Peanut Butter Bars. Simple ingredients like butter, semi-sweet chocolate chips, brown sugar, confectioner’s sugar and creamy peanut butter are carefully formed, usually in a 9×13 cake pan placed in a refrigerator, into not-so-simple-tasting cold, flavorful dessert bars that melt in the mouth.

The thing about Buttermilk Biscuits is that they’re considered both a main meal side dish and a dessert in the South. Although they’re normally found beside the warm and hot main dishes and slathered with fresh country butter or drowned in gravy and bacon bits, many Southerners also enjoy eating biscuits for dessert. Hot flaky dough is perfect under a scoop of ice cream, covered in syrup or slathered with sweet fruit jam.

Another main side favorite on Sunday in the South that can also double as dessert is classic Corn Bread. Most corn bread recipes use little more than flour, corn meal, milk or buttermilk, brown sugar and honey as their main ingredients. The crumbling-yet-moist texture and sweet after taste is enjoyed without any extras or with melting butter, syrup, jam or jelly.

Many a Southern cook has tricked their children into eating sweet potatoes by telling them that they were given a slice of pumpkin pie. Sweet Potato Pie looks almost the same as pumpkin pie, but often has a brighter color and sweeter taste. During Sunday meals, many Southerners enjoy a warm or chilled slice without toppings or a dollop of cool whipped cream.

Southern church gatherings offer a variety of cakes, including vanilla sheet cakes, round chocolate cakes and cupcakes. A favorite cake is Red Velvet Cake. This isn’t a dry, grocery store version of red velvet. Southern Red Velvet Cake is filled with ingredients that lock moisture into the cake, including at least two sticks of butter, several large eggs and buttermilk. The icing is also often made with cream cheese, butter and sugar. Needless to say, this cake can be a bit too rich and sweet for some people, but no Southern gathering would lack having it among the desserts.

Creamy, sweet taste sensations are a big part of the Southern diet. Sunday meals usually include creamy, moist Coconut Cake as a dessert option. These cakes often have a cream cheese or vanilla frosting and white or toasted, cream-colored shredded coconut coating exterior surfaces. Plenty of people find themselves pressing their forks to every coconut crumb on their plates so that no piece of a slice of this cake goes to waste.

Sweet and tangy, a classic Pineapple Upside Down Cake combines yellow cake, butter, pineapple rings, cherries and caramelized juices. The result is a cake that’s soaked in sticky sweet juice with a slightly crisp top. This cake is so sweet and rich that many people in the South can’t make room for any other desserts during a Sunday church meal after they’ve eaten a small slice of it.

When bread goes stale, it can go to waste. Southern cooks eventually realized that they could repurpose that bread to make a sweet, nutritious dessert. Bread Pudding starts out as a loaf of nearly expired or stale bread. Ripped into chunks and combined with milk, eggs, sugar, vanilla, fruit cocktail or other canned fruit, raisins, butter and whiskey sauce, it transforms into a deeply delicious dessert that smells like someone found a way to combine the scents of doughy, fresh-baked bread, vanilla cake and a fruit pie.

Rich, sweet desserts are everywhere during Sunday church meals. Another classic that many Southern cooks include during special events like anniversary parties and weddings is Bananas Foster. The list of ingredients isn’t long, but the flavor is memorable and lasts after the last bite. Bananas are sautéed in butter and brown sugar with or without cinnamon. The entire dish is then flambé using banana liqueur and rum. The bananas and sauce are poured hot over a scoop of vanilla ice cream. Sometimes caramelized pecans or walnuts are added for extra flavor and to create a contrasting crunchy texture.

Rounding out this list is Sweet Tea. Of all the beverages available during Sunday get-togethers, sweet tea is the one people can find the most in half-filled glasses with condensation running down the side. Sweet teas usually contain lemon or orange with white table sugar or honey. Some sweet teas are still made the old-fashioned way: tea bags steeped in hot water the night before and placed in the fridge to chill. 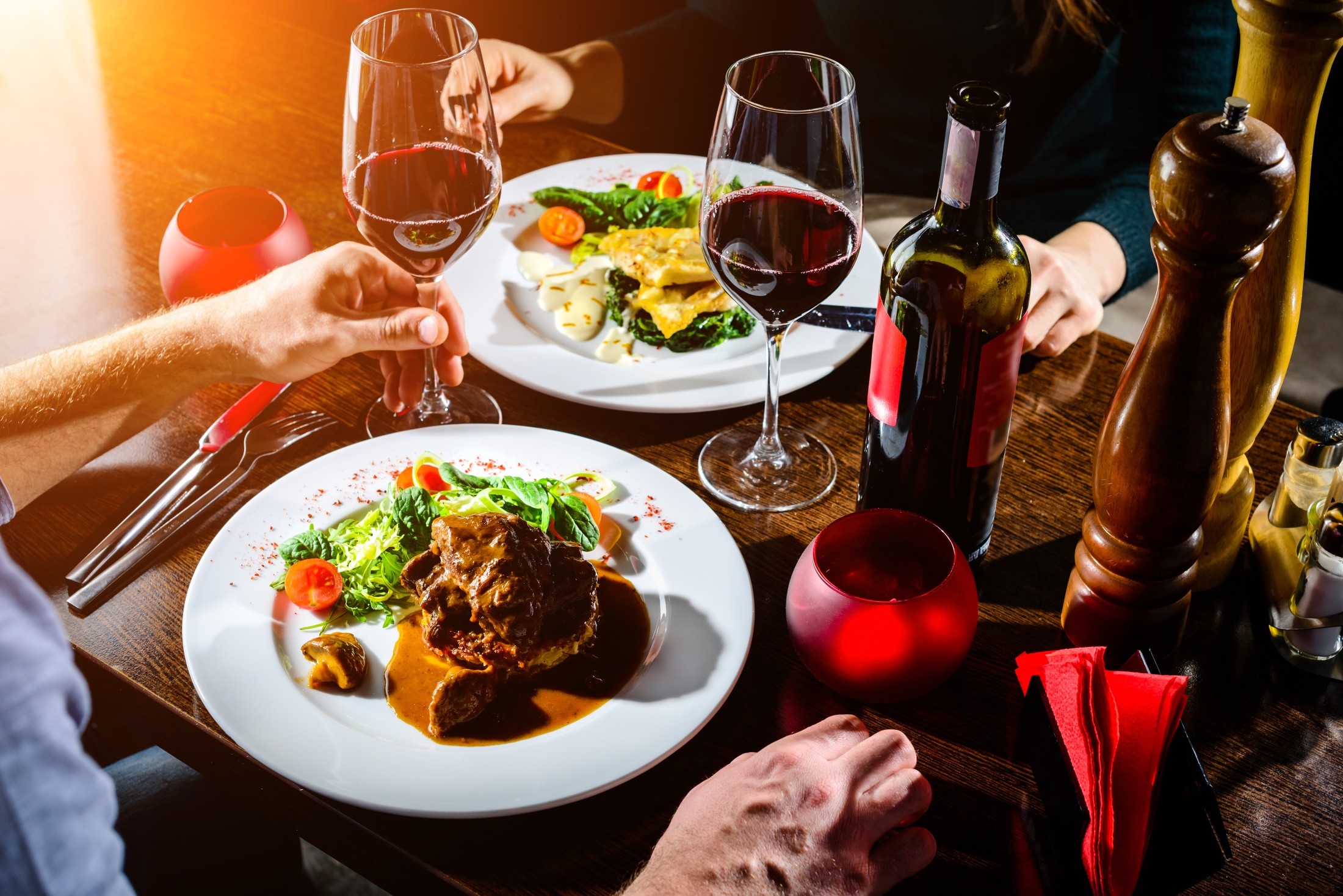